The Federal Trade Commission’s comments came on the departure of Twitter’s top privacy and compliance officers.

The departures come after the platform’s new owner, billionaire Elon Musk, moved swiftly to clean house after taking over Twitter for $44bn late last month. He announced plans to cut half its workforce last week, promised to stop fake accounts and is charging $8 a month for the Twitter Blue service, which will include a blue check verification.

“We are tracking recent developments at Twitter with deep concern,” Douglas Farrar, the FTC’s director of public affairs, told Reuters.

“No CEO or company is above the law and companies must follow our consent decrees. Our revised consent order gives us new tools to ensure compliance and we are prepared to use them,” Farrar said.

Also on Thursday, tech news website The Information reported Musk had warned Twitter’s remaining employees the company may have a net negative cash flow of several billion dollars next year and that “bankruptcy is not out of the question” if it cannot earn more than it spends.

In May, Twitter agreed to pay $150m to settle allegations by the FTC that it misused private information, like phone numbers, to target advertising to users after telling them the information was collected only for security reasons.

A lawyer on Twitter’s privacy team reported the executive departures in a note seen by Reuters and posted to Twitter’s Slack messaging system on Thursday.

In the note, the lawyer mentioned hearing Twitter’s legal chief Alex Spiro say Musk was willing to take a “huge amount of risk” with Twitter. “Elon puts rockets into space, he’s not afraid of the FTC,” the lawyer quoted Spiro as saying. 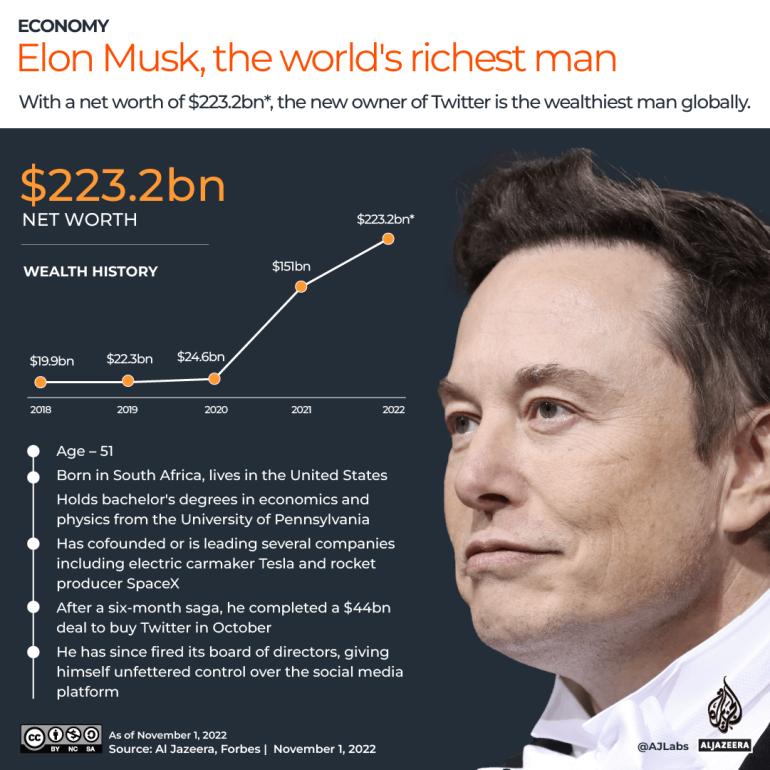 ‘Direction of the platform under its new leadership’

Since taking charge, Musk has fired former Chief Executive Parag Agrawal and other top management, and the company’s advertising and marketing chiefs left soon afterwards adding to concerns Twitter does not have enough people to monitor its compliance with regulations.

The takeover has also sparked concerns that Musk, who has often waded into political debates, could face pressure from countries trying to control online speech.

It prompted US President Joe Biden to say on Wednesday that Musk’s “cooperation and/or technical relationships with other countries is worthy of being looked at.”

Musk told advertisers on Wednesday, speaking on Twitter’s Spaces feature, he aimed to turn the platform into a force for truth and stop fake accounts, hoping to assuage advertisers rattled by the changes at the company.

His assurances may not be enough.

Chipotle Mexican Grill said on Thursday it had pulled back its paid and owned content on Twitter “while we gain a better understanding on the direction of the platform under its new leadership”.

It joined other brands including General Motors that have paused advertising on Twitter since Musk took over, concerned he will loosen content moderation rules.

Musk sent his first email to Twitter employees on Thursday, saying remote work would no longer be allowed and they would be expected in the office for at least 40 hours per week, according to Bloomberg News.

In the email, Musk said he wanted to see subscriptions account for half of Twitter’s revenue.

On Thursday Musk tweeted: “Far too many corrupt legacy Blue ‘verification’ checkmarks exist, so no choice but to remove legacy Blue in coming months.”

The lawyer’s note confirming the executive departures was first reported by tech news site The Verge.

FAA system outage halts departures of all domestic US flights

German coal mine standoff escalates as police move on protesters