New Delhi, India – Meena Chaudhary often visits the local market late in the evening when vendors are busy wrapping up makeshift stalls and vegetables are sold at throwaway prices. The quality is run-down but that hardly matters. It is one of the many tricks the 48-year-old homemaker uses to deal with soaring food prices.

In the Chaudhary family, diets have changed dramatically over the past two years. A litre of cooking oil is used with utmost caution so that it lasts about two weeks, halving consumption, milk is an occasional delicacy, and fruits and meats are out of reach. Even the humble egg has disappeared from the ever-shrinking menu.

“When my daughter goes for her beautician training classes, she is ashamed to carry a lunchbox from home as her friends might find out what we are eating,” Chaudhary said sitting in a tiny apartment in south Delhi’s Jagdamba camp where she lives with her husband and three grown-up children.

The most noticeable effect of falling earnings dented by inflation has been on household diets, said Dipa Sinha, an assistant professor at Delhi’s Ambedkar University. According to Sinha, who is also part of a pan-India Right to Food campaign led by civil society groups, families are not only eating less but are also eating fewer items, resulting in declining dietary diversity and nutritional outcomes. “Our field surveys show that most families have drastically reduced consumption of pulses, oils, proteins and perishables which are beyond their budgets. They are increasingly falling back on the federal government-run food subsidy scheme”, which is cereal-heavy. 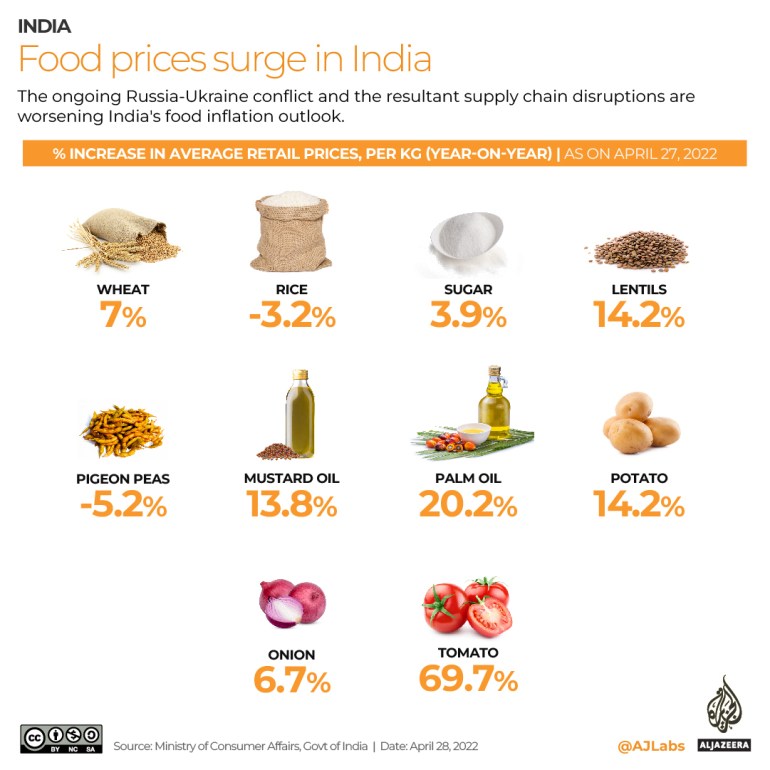 Retail inflation in India climbed to 7 percent in March, a 17-month-high, led by a more than expected rise in food prices which shot up 7.7 percent year-on-year. The Russia-Ukraine conflict which led to a surge in global food, energy and fertiliser prices is now threatening to make life harder for families like Chaudhary’s.

Even cereal prices, which were benign so far, are showing signs of heating up as India is aspiring to fill the wheat supply void created by the war. India’s wheat exports could touch record highs in 2022-23 despite an estimated 10-15 percent drop in production following an unusually hot March. However, signs of a domestic shortage could push the government to impose export restrictions and join the growing club of countries that want to secure domestic food supplies, resisting the prospects of higher export earnings, experts said.

China, for instance, has been on an import spree since early last year even as it restricted exports of fertilisers, while countries like Indonesia and Argentina — leading suppliers of edible oils — have recently imposed export restrictions to keep domestic food prices in check.

India’s enthusiasm to export wheat could come back to bite it at a later date, said Siraj Chaudhry, CEO of National Commodities Management Services Ltd and former chairman of Cargill India. “The desire to export could precipitate a run on stocks and impact delivery of state-run free food schemes.”

India’s cereal-heavy food subsidy programmes helped more than 800 million enrolled families ward off extreme hunger during the pandemic. “If the government discontinues the free food scheme, which is on till September, due to a cereal shortage, it will be a vindication that India’s food surpluses are notional and masked by widespread undernutrition,” Sinha from the Right to Food campaign said.

Recent surveys point to a precarious situation. More than two-thirds of families were unable to afford cooking gas, skipping meals were common and one in two families ran out of food in the month preceding the survey, found a Hunger Watch report released in February by the Right to Food campaign which surveyed 6,500 families in 14 states.

Another survey by the Azim Premji University released in late March, which surveyed 3,000 families in low-income settlements in India’s tech and start-up hub Bengaluru, found that four out of 10 workers were still jobless close to two years after India announced a stringent lockdown in March 2020. A staggering 40 percent of the families reported eating less than they ate pre-pandemic, while more than a quarter borrowed from informal sources and sold or pawned jewellery to meet daily expenses. 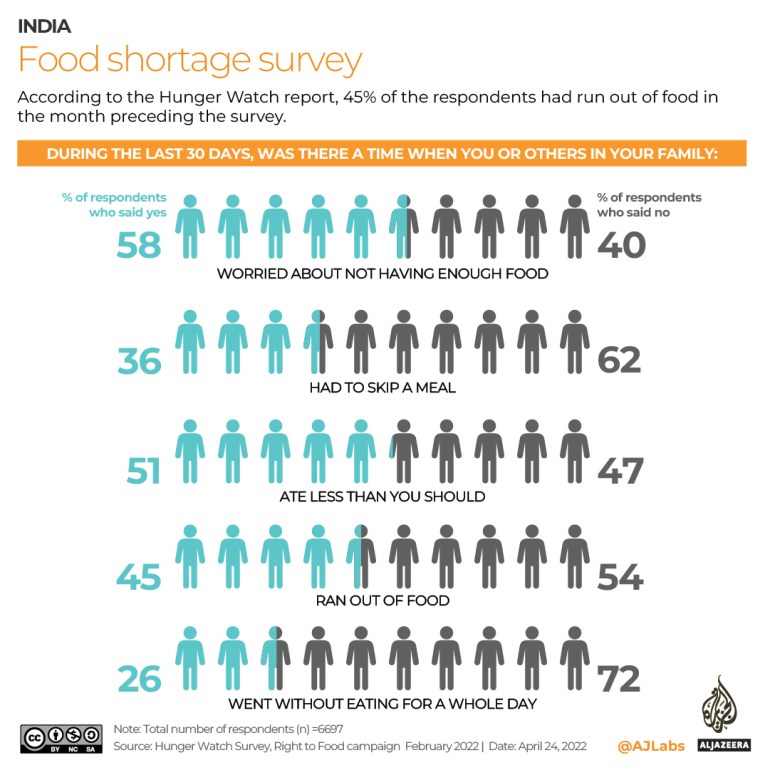 The risks of higher food prices in the coming months would make it worse for families like the Chaudharys. Their one room-cum-kitchen home is up a flight of rickety iron stairs, past a dark and narrow passage. The camp is a maze of slim lanes with houses stacked like matchboxes on either side, home to low-income families of casual workers who service the city’s posh neighbourhoods.

Chaudhary’s husband earns 10,000 rupees ($130) a month in his job as a security guard, the same as two years back before the COVID-19 pandemic hit. Their sons, aged 19 and 22, have been on a job hunt for months now. Crunched earnings together with rising prices of food and cooking gas have forced the family to give up on occasional fritters and homemade sweets. When a guest arrives to stay for a few days it upends the family’s carefully planned expense sheet. Yet most months cash runs out by the twentieth, pushing Chaudhary to borrow from friends and neighbours or dig into the family’s meagre savings.

But food inflation will remain a problem as there are no signs of resolution of the Russia-Ukraine conflict and the resultant supply shocks, said Dharmakirti Joshi, chief economist at CRISIL, a ratings and research firm. “Government budgets will take a hit due to increasing food and fertilizer subsidies. The worrying aspect is that food inflation is getting broad-based, impacting more and more commodities.”

The result could be devastating for a sizable chunk – six out of every 10 Indians are dependent on state-delivered subsidised food. Cereal inflation will likely get a tailwind from rising prices of wheat, maize and barley, which threatens to make everyday items, from bread, poultry and milk to biscuits and beer, expensive for consumers. The hit to consumer wallets will come on top of soaring prices of edible oils, largely due to India’s acute dependence on imports.

Wholesale agriculture markets would be on fire by now if not for lower incomes and subdued consumer demand, said Arshad Perwez, chief revenue officer at Our Food, a Hyderabad-based farm supply chain start-up. “Previous periods of high food prices, for instance between 2009-2014, were driven by both supply constraints and strong demand, unlike now when aggregate demand is visibly weak.”

That weakness is palpable at places like the Jagdamba camp. Surya Kali, a 43-year-old mother of two, slashed her daily milk purchases from a litre pre-pandemic to one 200ml pack priced at an affordable 10 rupees ($0.13). “Fruits and chickens are the stuff of dreams. I can’t even afford to buy my pleading daughter a glass of fresh sugarcane juice on her way back from school. Instead, I tell her: you’ll catch a cold,” she said.

For some on the margins, life is at a tipping point. Kaushilya Devi, a widow who works as domestic help, was recently diagnosed with cervical cancer. She can ill afford the diet prescribed by the doctor which includes three glasses of milk daily, especially after the government deemed invalid her document that allowed her access to the state-run food subsidy scheme once she migrated to Delhi in search of work.

On a scorching summer day last week, she prepared to cook a meal-in-a-pot for herself and her three kids. Rice, donated by the family where she works as a help, cooked with onions, green chillies, a pinch of salt and a few spoons of oil. She called it pulav, also known as pilaf – a nutritious dish cooked with generous portions of meat, spices, vegetables and fats.