As the Russia-Ukraine war enters its 292nd day, we take a look at the main developments.

Here is the situation as it stands on Monday, December 12:

Heavy fighting in the country’s east and south continued unabated, while drone and missile strikes on key power infrastructure kept many Ukrainians in the cold and dark.

Russian forces continued with attempts to break through Ukrainian defences, training tank and artillery fire on 26 settlements near Avdiivka and Bakhmut in the east,

Ukraine attacked occupied Melitopol, a strategically located city in the country’s southeast. The Russian-installed authorities said a missile attack killed two people and injured 10, while the exiled mayor of the city said many “invaders” were killed.

Ukrainian forces attacked a hotel town of Kadiivka where members of Russia’s private Wagner military group were based, killing many.

Ukraine’s top security officials have ordered punitive measures against seven senior clerics, part of a crackdown on a branch of the Orthodox Church with longstanding ties to Moscow.

Some Russian officers fighting in Ukraine are unhappy with the military top brass and President Vladimir Putin because of the poor execution of the war, an influential nationalist Russian blogger said after visiting the conflict zone.

Russia launched what it calls a “special military operation” in Ukraine because its concerns around peace accords between Kyiv and Russian-backed separatists were ignored, Russian news agencies quoted the Kremlin spokesman as saying.

The port of Odesa is not operating after the latest attack on the region’s energy system.

All non-critical infrastructure in Odesa was without power after Russia used Iranian-made drones to hit two energy facilities, leaving 1.5 million people without power. 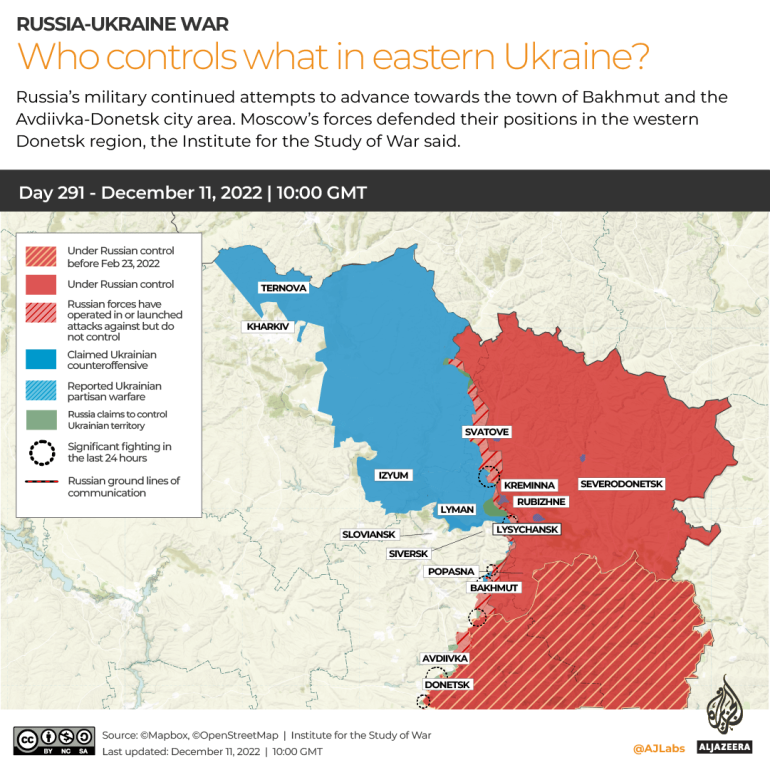 US Treasury Secretary Janet Yellen said Washington’s support for Ukraine’s military and economy has totalled more than $50bn and counting.

Turkish President Recep Tayyip Erdogan discussed the Black Sea grain export agreement with the leaders of Russia and Ukraine, as both sides seek changes that would boost their exports.

European Union foreign ministers meet on Monday to try to agree on further sanctions on Russia and Iran and an additional $2.11bn for arms deliveries to Ukraine.

There are no peace talks and no end in sight to the deadliest conflict in Europe since World War II.

An international team of legal advisers has been working with local prosecutors in Ukraine’s recaptured city of Kherson in recent days as they gather evidence of alleged sexual crimes by Russian forces.

Russia’s ambassador to Moscow said Britain’s royal family was recommended not to have any contact with the Russian embassy in London, the Izvestia newspaper reported.

Emergency crews are working to ease power shortages in many parts of Ukraine after Russian attacks, particularly the Black Sea port of Odesa, Zelenskyy said.

Can Ronaldo rediscover his purpose after World Cup exit?