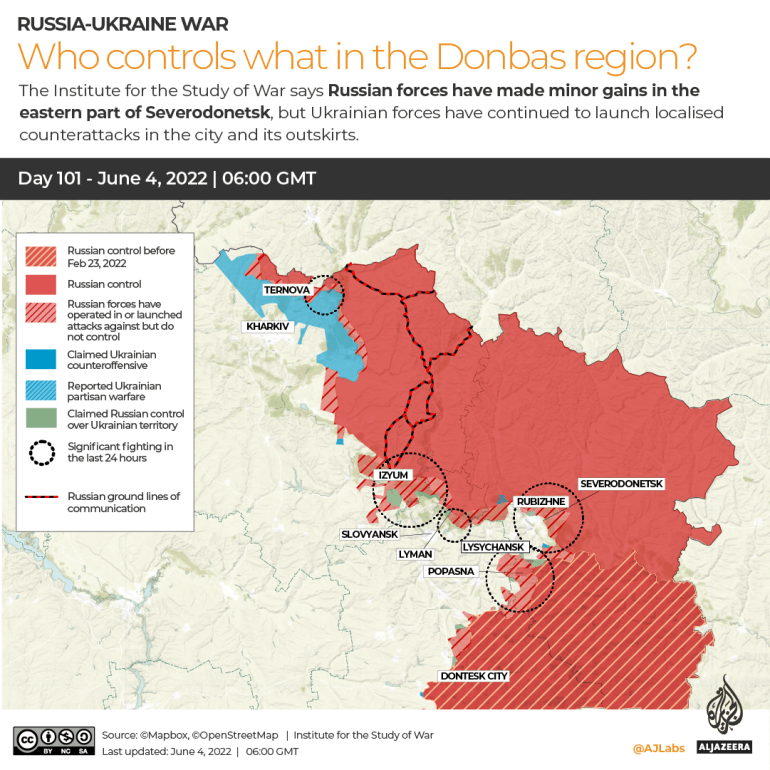 Here are all the latest updates:

Vitali Klitschko, the mayor of Kyiv, says “several explosions” took place early on Sunday morning in the Darnytski and Dniprovskyi districts of the capital.

Citing a witness, the agency said smoke was seen in the city following the explosions.

Earlier, air raid sirens had gone off across much of Ukraine, including in the Kyiv region, the report added.

US Defense Secretary to host Ukraine aid meeting in Brussels

Lloyd Austin, the US Defense Secretary, says he will host a meeting next week of a Contact Group set up to coordinate aid to help Ukraine defend itself against Russian attacks.

The Ukraine Defense Contact Group meeting will take place in Brussels on June 15, according to the Kyiv Independent, a Ukrainian news website.

Lloyd said in a tweet that “defense leaders from literally all over the world will be there to discuss the ongoing crisis in Ukraine in the wake of Russia’s unprovoked invasion”.

While in Brussels, the Defense Secretary will also attend a NATO meeting that will discuss Sweden and Finland’s bids to join the security alliance.

Finally, I’ll go to Brussels, Belgium 🇧🇪 to host the next in-person Ukraine Defense Contact Group meeting. Defense leaders from literally all over the world will be there to discuss the ongoing crisis in Ukraine in the wake of Russia’s unprovoked invasion. (5/6)

Bridget Brink, the US envoy to Ukraine, has visited Borodyanka, a town northwest of Kyiv where Russian forces have been accused of committing war crimes.

“Borodyanka has suffered horribly,” Brink said in a tweet late on Saturday.

“Bearing witness to atrocities committed in Russia’s brutal war, including families killed in their own homes, only strengthens my resolve to do everything we can to hold the perpetrators of these awful crimes to account.”

Borodyanka has suffered horribly. Bearing witness to atrocities committed in Russia’s brutal war, including families killed in their own homes, only strengthens my resolve to do everything we can to hold the perpetrators of these awful crimes to account. pic.twitter.com/vPQ7AzKzPc

Russia’s sanctions against Gazprom Germania and its subsidiaries could cost German taxpayers and gas users an extra 5 billion euros ($5.4bn) a year to pay for replacement gas, the Welt am Sonntag weekly has reported, citing industry representatives.

In May, Russia decided to stop supplying Gazprom Germania, which had been the German subsidiary of Gazprom, after Berlin put the company under trustee management due to Russia’s invasion of Ukraine. Since then, the Bundesnetzagentur energy regulator, acting as trustee, has had to buy replacement gas on the market to fulfil supply contracts with German municipal utilities and regional suppliers.

Welt am Sonntag reported that Economy Minister Robert Habeck estimates an extra 10 million cubic meters per day are required, which would currently cost about 3.5 billion euros ($3.7bn) a year. Further costs arise from the filling of the Rehden natural gas storage facility, which Habeck ordered on Wednesday, it said.

The paper also said the additional costs would be passed on to energy suppliers and end customers in the form of a gas levy from October.

The economy ministry declined to comment on the scale of costs incurred, Welt am Sonntag said, and no one at the ministry replied immediately to an emailed request to comment.

The president of Ukraine’s football federation says Kyiv is planning to resume competitive football in the country in August despite being under attack by Russia.

Andriy Pavelko told the Associated Press news agency that the Ukrainian president has approved the decision.

“I spoke with our president, Volodymyr Zelenskyy, about how important football is to distract,” Pavelko said in Cardiff.

That is a future with players being able to take to the field again in Ukraine to provide uplifting sports moments of joy.

“So we took the decision with the president that we would resume the Ukrainian championship in August,” Pavelko said through a translator. “In Ukraine we will play on every level. So the Premier League, and the first and second professional divisions, and women’s championship.

“At all levels we will start in August. The decision was taken with the president of Ukraine.”

Ukraine’s president has described the situation in Severodonetsk as “extremely difficult” and said street fighting was continuing in the eastern city.

“Russian troops again fired at the border areas of the Sumy region, Mykolaiv, cities, and people of the Zaporizhzhia region, and Kharkiv region,” Zelenskyy said in his evening address.

“The situation in Severodonetsk, where street fighting continues, remains extremely difficult. It is also difficult in Lysychansk, Marinka, Kurakhove, and other cities and communities of Donbas. Constant air strikes, artillery, and rocket attacks. By today’s morning, the total number of various Russian missiles used against Ukraine is already 2,503.”

Ukraine’s president says the main church at Sviatohirsk Lavra, one of the country’s holiest Orthodox Christian sites, had burned down following Russian shelling.

News of the destruction of part of the monastery came as Russian forces escalated their attacks in the Donetsk region.

“On this day, the 101st day of a full-scale war, in the Donetsk region in the Sviatohirsk Lavra, the Skete of All Saints burned down. It caught fire as a result of the Russian artillery attack,” Zelenskyy said in his evening address.

“They are ready to burn everything: Orthodox churches as well as anything else in Ukraine.”

He claimed three monks at the Sviatohirsk Lavra had been killed in Russian shelling and said 113 Orthodox churches have already been destroyed or damaged by Russia since the start of the invasion in February.

Russian and Ukrainian military officers have blamed each other for the damage at the Sviatohirsk Lavra.

Welcome to Al Jazeera’s continuing coverage of the Russia-Ukraine war.

Read all the updates from Saturday, June 4 here.