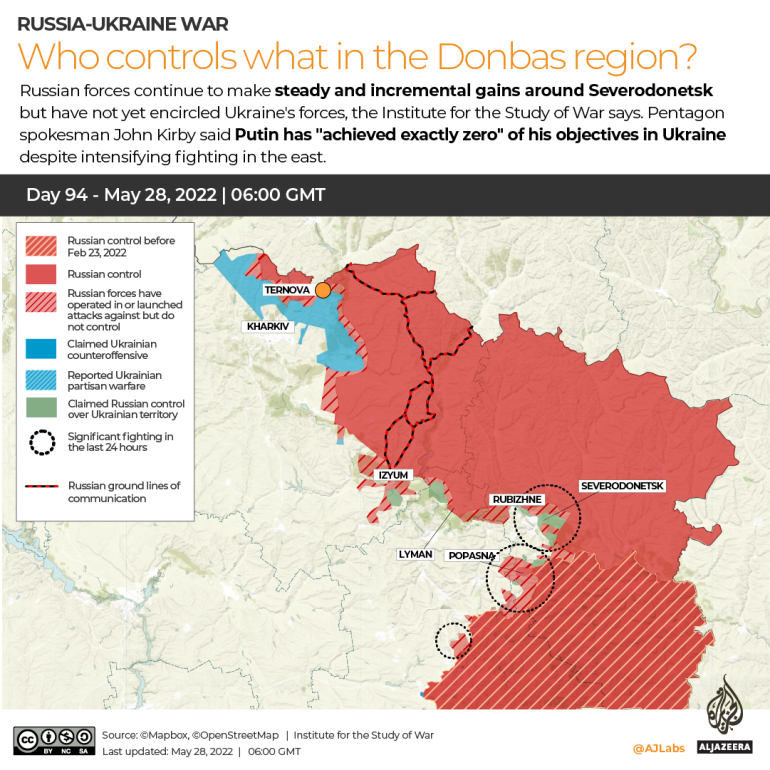 Japan has announced $1.7m in aid to help transport aid supplies to Ukraine, according to the NHK broadcaster.

Officials said the money will go to the United Nations Office for Project Services, NHK reported.

Dozens of homes in the Ukrainian village of Demydiv remain partially submerged months after a dam was destroyed and the area flooded to stop Russian troops from advancing on Kyiv, officials say.

“At this time, about 50 houses in the village of Demydiv remain flooded,” regional governor Oleksiy Kuleba wrote in a post on the Telegram messaging app.

“People are understanding of the situation. We, in turn, make every effort to resolve the issue.”

The Ukrainian military blew up the dam on the river Irpin in February, flooding houses and fields in Demydiv, whose history goes back a thousand years.

Ukraine’s president says Russian forces are trying to prevent the departure of Ukrainians from occupied areas in southern Kherson region.

“They do not provide any humanitarian corridors. And closed the individual departure of people. Those who are confident in their position would definitely not make such decisions. This is clearly a sign of weakness,” Zelenskyy said in his evening address.

Ukraine’s president says he is preparing to address a meeting of the European Council, which will take place on May 30-31.

“In particular, I will talk about the following: terror, which has become in fact the only form of action of the Russian state against Europe. Terror on the land of Ukraine. Terror in the energy market of Europe, not just our country. Terror in the food market, and on a global scale. And what type of terror will be next?”

He said in his evening address that he will continue to address the parliaments of European countries next week.

“There will be many other international activities aimed at strengthening our state and increasing the joint pressure of the whole free world on Russia.”

Wearing a t-shirt that read, “I’m Ukrainian”, Zelenskyy said the Russian focus remains focused on the cities of Sievierodonetsk, Lysychansk, Bakhmut and Popasna.

He added: “I will remind the world that Russia must finally be officially recognized as a terrorist state and a state sponsor of terrorism.”

The Institute for the Study of War (ISW) said an ongoing counteroffensive by Ukrainian forces in the Kherson region has reportedly pushed Russian forces back to “unfavourable borders” near the villages of Andriyivka, Lozove, and Belohirka in Kherson.

The policy research organisation said earlier on Saturday that a ground attack launched by Russian forces near Kherson-Mykolaiv had been unsuccessful.

It was the first such Russian attack near Kherson for several weeks.

Reznikov said Ukraine had received a range of heavy artillery pieces, including modified US-made M109 self-propelled howitzers that will allow the Ukrainian military to strike targets from longer distances.

Harpoon shore-to-ship missiles will be operated alongside Ukrainian Neptune missiles in the defence of the country’s coast, including the southern port of Odesa, the minister wrote on his Facebook page.

Serhiy Bratchuk, a spokesman for the Odesa regional military administration in southern Ukraine, said in an online post that “so many Harpoons have been handed over to us that we can sink the entire Russian Black Sea Fleet. Why not?”

Ukraine official says agreements with Moscow not worth ‘broken penny’

Ukrainian presidential adviser and peace talks negotiator Mykhailo Podolyak said any agreement with Russia could not be trusted, adding the only way to stop Moscow’s invasion was by force.

“Any agreement with Russia isn’t worth a broken penny,” Podolyak wrote on the Telegram messaging app. “Is it possible to negotiate with a country that always lies cynically and propagandistically?”

“Russia has proved that it is a barbarian country that threatens world security,” Podolyak said. “A barbarian can only be stopped by force.”

Russia and Ukraine have blamed each other after peace talks stalled, with the last known face-to-face negotiations on March 29.

Moscow generates lies: “🇺🇦 refuses from negotiations”. We can negotiate, but only if 🇷🇺 renounces hypocrisy (say one thing – do another), leaves the south of the country and withdraws its troops. Until then, negotiations are conducted by another “delegation” on the frontline.

Russian President Vladimir Putin has told the leaders of France and Germany that Moscow is ready to look for ways to ship grain stuck in Ukrainian ports but demanded the West lift sanctions.

Putin said the difficulties in supplying grain to world markets were the result of “erroneous economic and financial policies of Western countries”.

“Russia is ready to help find options for the unhindered export of grain, including the export of Ukrainian grain from the Black Sea ports,” Putin told Macron and Scholz, the Kremlin said.

“An increase in the supply of Russian fertilisers and agricultural products will also help reduce tensions on the global food market, which, of course, will require the removal of the relevant sanctions.”

The Mayor of the southern Ukrainian city of Mykolaiv has released video footage which showed damage caused by shelling in the residential area of the city.

One woman died and seven people were injured, with two of them in a serious condition, according to Mayor Alexander Senkevich.

Several residents were seen cleaning up damage in the footage – a couple made comments about their damaged homes laced with irony, saying the Russian army had “made it better”, and that they had been “freed” from “everything that we have got in our 40 years”.

Welcome to Al Jazeera’s continuing coverage of the Russia-Ukraine war.

Go here for all the updates from Saturday, May 28.

Ukraine to get armoured combat vehicles from West, asks for tanks