US banks and individuals will be barred from accepting bond payments from Russia’s government after 12:01am NY time (04:01 GMT) on Wednesday.

By Sydney Maki and Daniel FlatleyBloomberg

Russia will get pushed closer to a potential default after the US Treasury Department said it will let a key sanctions waiver benefitting American investors expire.

US banks and individuals will be barred from accepting bond payments from Russia’s government after 12:01 a.m. New York time on Wednesday, when a license that has so-far allowed the cash to flow ends, Treasury said in a statement on Tuesday.

“OFAC will not renew the provisions” of the waiver “that expire on May 25, 2022 at 12:01 a.m. EDT,” the Treasury Department said in a statement posted from the Office of Foreign Assets Control.

Treasury Secretary Janet Yellen last week said it was “reasonably likely” that her department would let the license expire, saying it was always meant to be a temporary measure.

The decision to go forward ending the carveout indicates that the US would rather force Russia — under a slew of punishing sanctions over its war in Ukraine — into default than allow the nation to drain its coffers to the benefit of US investors.

But while the change in US restrictions adds yet another hurdle to getting bond payments to foreign investors, it’s not yet clear if this will be enough to tip Russia over the default line.

For one, bondholders outside the US may still be able to receive the funds. And because most holders of Russian bonds are in Europe, there wouldn’t be enough creditors left short to declare a default, according to ITI Capital, one of Moscow’s biggest brokerages. The threshold is usually holders of 25% of the outstanding bonds.

Russia is scheduled to make about $100 million in foreign debt payments Friday. Given the expiry of the loophole was expected, it started transferring the money last week to get ahead of the new restrictions. 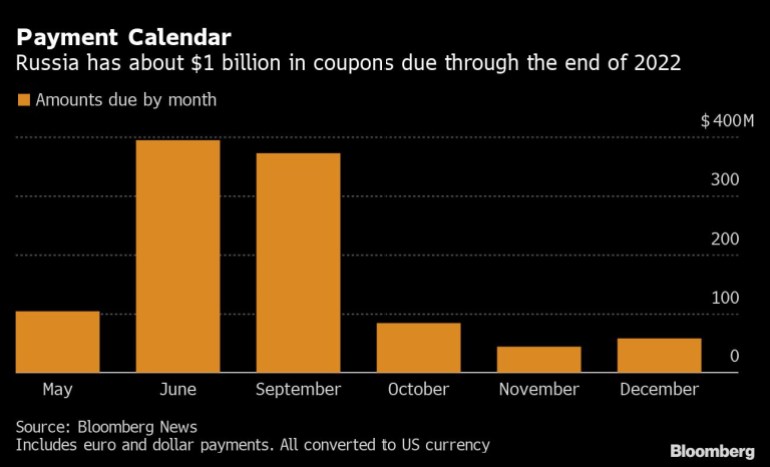 If there’s a failure to pay, Russia then has a grace period of up to 30 days to find a solution, such as it did in early May, when it got money to investors at the last minute after payments were initially blocked.

In all, Russia owes about $1 billion in coupon payments through the rest of 2022, but it has plenty of cash, thanks to the billions flooding in weekly from its sales of oil, gas and other commodities.

Not all payments to Americans are barred after May 25. According to a license issued by Treasury on April 7, US investors have until June 30 to divest from Russian financial institution Alfa-Bank AO and until July 1 to divest from diamond company Alrosa PJSC.

The ruble — already at a four-year high — was little changed by the Treasury announcement. The currency has been the best performer globally this year, gaining about 30% against the dollar.

(Adds statement from Treasury in third paragraph, exceptions to deadline in second-to-last paragraph.)

–With assistance from Carolina Wilson.