This blog is now closed. Thanks for joining us.

Right, Qatar will take on Ecuador on November 21, that’s confirmed.

It will be a while before we know the teams for the December 18 game… that’s the World Cup final.

Until then, stay safe and give our World Cup Qatar 2022 draw wrap a read.

Thanks for joining us… I’ll be humming Hayya Hayya all night.

As representatives of the qualified nations join the FIFA president on the stage for a photo, I have a burning question: Where is the group of death?

The #FIFAWorldCup groups are set 🤩

So now you know who your favourite team is playing.

Well, kind of. We still have three unknowns when it comes to the participants but the groups are known, if your team makes it.

Cafu pulls out the first ball and it’s Qatar (A) followed by:

A reminder to keep an eye on the table above. The groups will be updated as soon as the balls are drawn (soon hopefully). Keep refreshing. 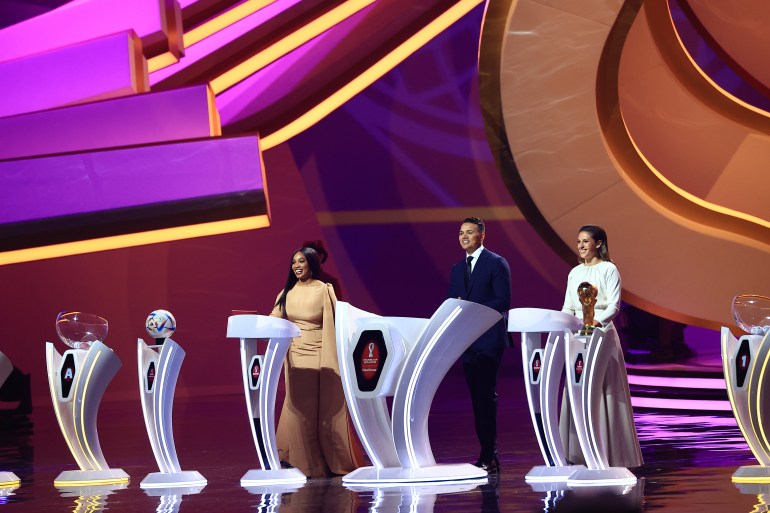 Not too long to go I’m guessing (hoping).

Didier Deschamps, France’s World Cup winning captain and coach, brings the trophy onto the stage with his son.

Qatar’s emir is called onto the stage for a brief speech.

He reminds Infantino that people are waiting for the draw and not their speeches.

FIFA president takes centre stage… welcoming the world to Qatar and with a plea to stop conflicts around the world.

“We want this to be the World Cup of unity, of peace,” he said before stepping off the stage.

The hosts of the night, Idris Elba and Reshmin Chowdhury, have made an appearance. The brief intro is followed by the performance by Trinidad Cardona, Davido and Aisha of Hayya Hayya, the first  single from the World Cup 2022 soundtrack.

And the names of the participating nations are displayed on giant screens in the back.

A few performances to get through before we reach the team and group pots. 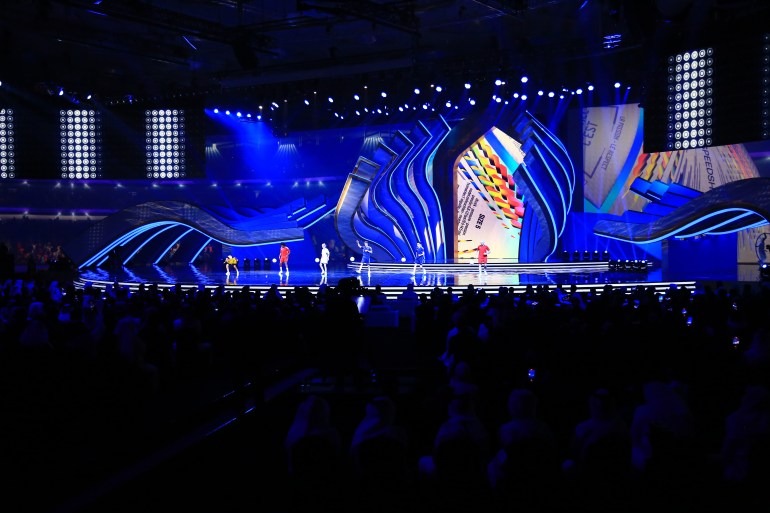 Qatar’s emir is in the house and we’re underway with a video and an animation… including the launch of the official mascot.

“Why go to the national team? You’re not going to go to the World Cup.”

That is what former Canadian striker Alex Bunbury says he was asked by his managers at West Ham United, Harry Redknapp and Billy Bonds, ahead of the 1994 FIFA World Cup qualifiers.

The pots are ready

But which teams won’t be in the pots?

Italy, current European champions, Russia, Egypt, Nigeria, Ivory Coast and Algeria are just some of the teams who failed to qualify for the World Cup.

Three qualifying spots up for grabs

With the draw still about 40 minutes away, a reminder that 29 of the 32 teams have been confirmed while the remaining three will be decided by June this year.

What happened at the FIFA Congress?

The 72nd FIFA Congress took place in Doha on Thursday.

In addition to Qatar’s treatment of migrant workers, the Russia-Ukraine war and biennial World Cup plans were also mentioned.

Who will be doing the World Cup draw?

Warming up off the pitch

The world’s media has descended upon Doha’s Exhibition and Convention Centre for the draw ceremony. Kick-off here is still almost two hours away though.

Qatar 2022 stadiums at a glance

The FIFA World Cup Qatar 2022 will be played across eight stadiums.

Click here for a quick look at the eight stadiums.

Which teams have qualified for the World Cup?

Including the hosts Qatar, 29 teams have qualified for the 32-team World Cup so far. 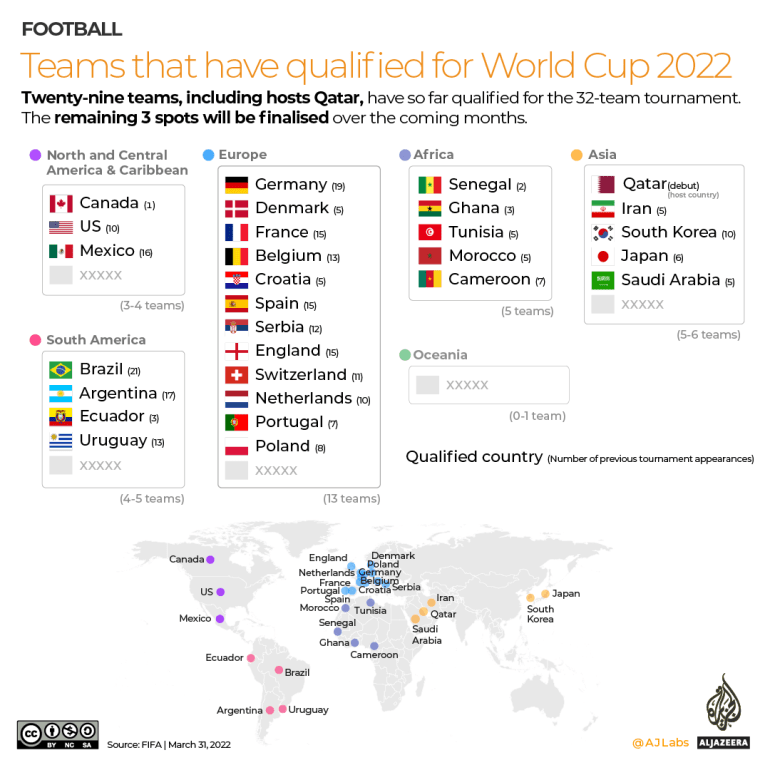 A few teams, a few more pots and a lot more balls. How does a draw really work?

Head over to our explainer here to find out how many teams are part of the draw and how the seedings and pots work.