The tech-heavy Nasdaq 100 dropped 0.3 percent Thursday, extending its decline this year to 27 percent.

By Denitsa Tsekova and Thyagaraju AdinarayanBloomberg

Tech and megacap growth stocks are selling off at the fastest pace since the dotcom bust of 2000 when compared with cheaper companies such as banks and energy firms that pay higher dividends.

Investors are cooling on stocks whose earnings prospects are far off in the future — a future made all the more uncertain after prices rose more than expected in April, keeping inflation near a 40-year high. Add a more aggressive policy response by the Federal Reserve and a possible recession and all the ingredients for a deeper tech bust are lining up.

“This CPI print was perhaps the most eagerly anticipated in recent history, particularly for growth investors with high duration names forming the bulk of their portfolios,” said Lewis Grant, a senior portfolio manager at Federated Hermes in London. It “would not have been welcome news.” 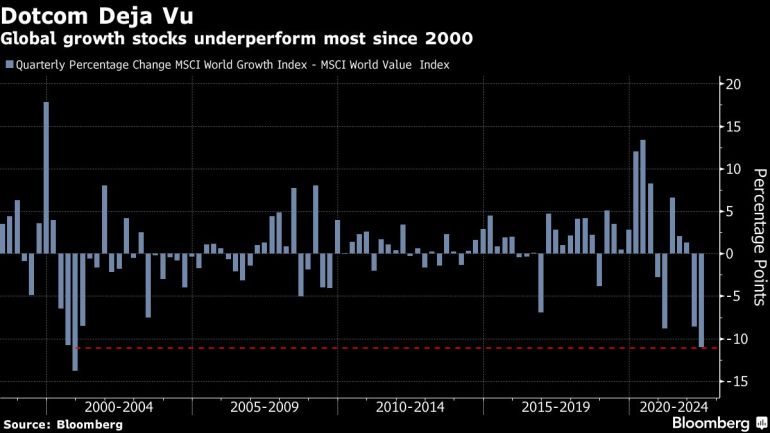 Data on Thursday also showed producer prices rising faster than expected, adding yet further pressure on US policymakers to ramp up rate hikes. That’s fanning speculation the Federal Reserve will resort to a three-quarter point move to follow last week’s increase of 50 basis points, the biggest in two decades.

For growth stocks such as Apple Inc., Google-owner Alphabet Inc. and Amazon.com Inc. that means a bigger discount to their earnings power. The tech-heavy Nasdaq 100 dropped 0.3% Thursday, extending its decline this year to 27%.

“The major vulnerabilities for growth stocks stems from the destruction of excess liquidity at a global level, and the associated higher discount rates,” said Peter Chatwell, head of global macro strategies trading at Mizuho International Plc. “Now that the monetary tightening is in full force, this should only be the beginning of the macro trend.”

Almost half of Nasdaq constituents are down at least 50% from the rolling highs, according to JPMorgan Chase & Co. Baskets tracking unprofitable technology firms and richly valued software firms have lost all of their pandemic-era gains.

What’s more, growth stocks are likely to remain under pressure amid the prospect of a more aggressive Fed, according to Citigroup Inc. strategists. They reiterated their preference for cheaper value shares. 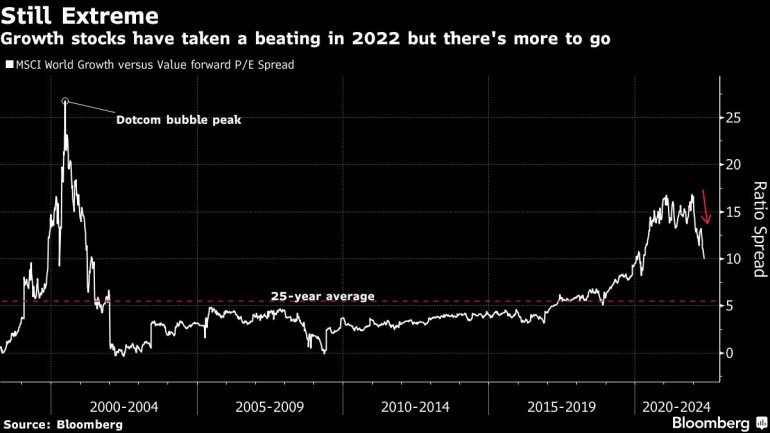 Growth stocks remain pricey, especially when compared with cyclical value stocks. The MSCI World Growth Index is currently trading at 22 times forward earnings versus 12 times for their value counterparts. The gap between the two famous investing styles is double the 25-year average.

Those future earnings expectations puts growth stocks directly in the path of inflation that erodes future revenue. Just look at Tesla Inc., which trades at 55 times 12-month forward earnings — a far cry from the S&P, which trades at 16.6 times.

“Mega-cap growth has fallen out of favor due to slowing earnings growth and the likelihood that economic conditions will not be as favorable for them relative to the rest of the market as they were during the height of the pandemic,” said Ed Clissold, the chief U.S. strategist at Ned Davis Research. “A continuation of the tightening cycle should mean more pain for growth.”

Celebrations kick off in Asia as world enters 2023

2022: The year Taliban cracked down on women’s rights