US central bankers are trying to cool the hottest inflation in 40 years without tilting the economy into a recession.

Most Federal Reserve officials agreed at their gathering this month that the central bank needed to tighten in half-point steps over the next couple of meetings, continuing an aggressive set of moves that would leave policy makers with flexibility to shift gears later if needed.

“Most participants judged that 50 basis-point increases in the target range would likely be appropriate at the next couple of meetings,” minutes of the Fed’s May 3-4 meeting released Wednesday in Washington showed. “Many participants judged that expediting the removal of policy accommodation would leave the committee well positioned later this year to assess the effects of policy firming and the extent to which economic developments warranted policy adjustments.”

Treasury yields fluctuated, stocks rose and the dollar pared its gain following the report. Markets continued to show traders pricing in 100 basis points of rate hikes over the next two meetings. 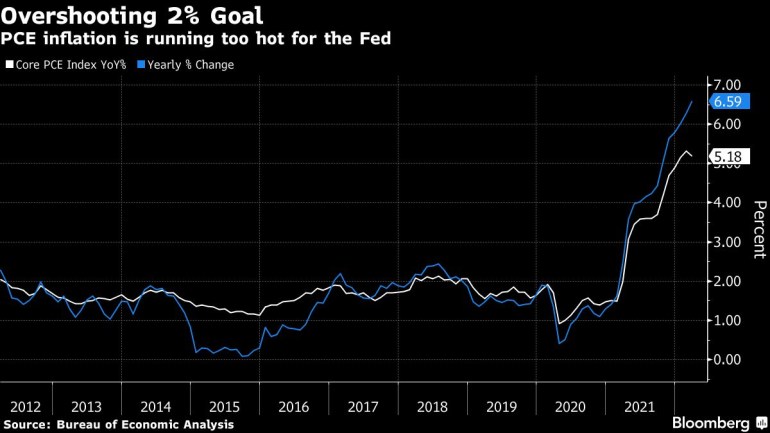 “There’s no disagreement in the committee — they’ve got to get moving here, so it’s not a big surprise. The real question is going to come later, when we get into the fall and when they decide whether to slow down or pause,” Ethan Harris, head of global economics research at Bank of America Corp, said during an interview on Bloomberg Television. “I think the Fed has to risk a downturn,” he said. “They’ve let things run out of control.”

After raising interest rates by a half-percentage point at the May meeting, the minutes confirmed support by most officials to continue such increases over at least their next two gatherings with their inflation battle far from won.

Fed officials “noted that a restrictive stance of policy may well become appropriate depending on the evolving economic outlook and the risks to the outlook,” the minutes said. They said that labor demand continued to outstrip available supply.

In the weeks since the meeting, financial-market volatility has spiked as investors fret over the risk of a downturn. Stocks have plummeted, Treasuries have rallied and investors have pared back bets on how quickly policy rates will rise. Atlanta Fed President Raphael Bostic suggested on Monday that a September pause “might make sense” if price pressures cooled. The minutes showed officials attentive to financial conditions as they prepare to raise rates further.

“Several participants who commented on issues related to financial stability noted that the tightening of monetary policy could interact with vulnerabilities related to the liquidity of markets for Treasury securities and to the private sector’s intermediation capacity,” the minutes said.

Worry about the outlook for corporate profits and rising interest rates has also roiled financial markets. The Standard and Poor’s 500 stock index was down 17% year-to-date through Tuesday, while U.S. Treasury two-year notes yielded 2.48% versus about 0.8% in early January. 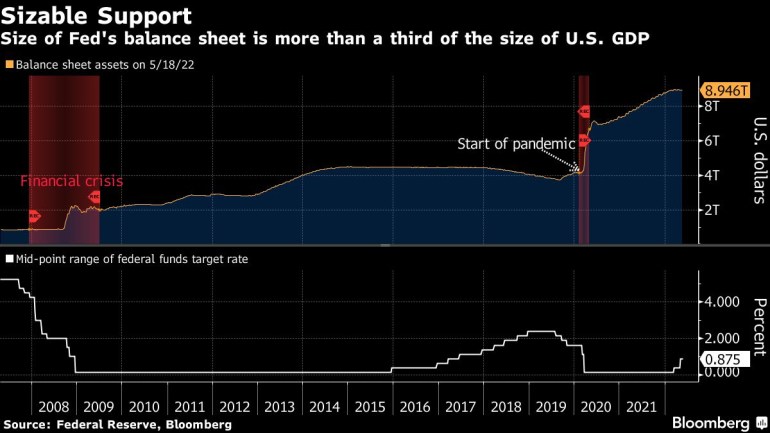 At the meeting, officials also finalized plans to allow their $8.9 trillion balance sheet to begin shrinking, putting additional upward pressure on borrowing costs. Starting June 1, holdings of Treasuries will be allowed to decline by $30 billion a month, rising in increments to $60 billion a month in September, while mortgage-backed securities holdings will shrink by $17.5 billion a month, increasing to $35 billion.

The minutes showed that the Fed staff revised up their inflation forecast. They estimated that the personal consumption expenditures price index would rise 4.3% in 2022 before decelerating to a 2.5% increase next year.

U.S. central bankers are quickly pulling back monetary stimulus as they attempt to curb the highest inflation rates in decades. Price gains have been fueled by low interest rates, knotted supply chains and higher food and energy costs in the wake of Russia’s invasion of Ukraine.

The Fed’s target for its preferred inflation gauge, the Commerce Department’s personal consumption expenditures price index, is 2% a year. The measure rose 6.6% for the 12 months ending March, while the Labor Department’s consumer price index rose 8.3% in April.

High inflation has angered Americans and hurt President Joe Biden’s approval ratings, with ire also directed at the Fed. Even so, Jerome Powell was confirmed by the Senate to a second term as chair this month in an 80-19 vote.

So far, the rise in borrowing costs has yet to significantly dent consumer demand. Retail sales rose at a solid pace in April, although with the 30-year mortgage rate now above 5%, the pace of home sales has slowed.