While much of the fighting in the past month has unfolded in southern Ukraine’s Kherson region, the battle heating up around Bakhmut demonstrates Russian President Vladimir Putin’s desire for visible gains following weeks of clear setbacks.

Taking Bakhmut would rupture Ukraine’s supply lines and open a route for Russian forces to press on towards Kramatorsk and Sloviansk, key Ukrainian strongholds in Donetsk province. Pro-Moscow separatists have controlled parts of Donetsk and neighbouring Luhansk province since 2014.

Al Jazeera’s Assed Baig, reporting from Bakhmut, said there was an “exchange of fire taking place between Ukrainians and the Russians” on Friday.

“The Russians have made some gains, but they’re still not in Bakhmut,” Baig said. “The Ukrainians have said they managed to repel those attacks.”

Mercenaries from the Wagner Group, a Russian military company, are reported to be leading the charge.

Russia has battered Bakhmut with rockets for more than five months. The ground assault accelerated after its troops forced the Ukrainians to withdraw from Luhansk in July. The line of contact is now on the city’s outskirts.

“Day after day, for months, they have been driving people there to their deaths, concentrating the maximum power of artillery strikes there,” Zelenskyy said.

The shelling killed at least three people from Wednesday to Thursday, according to local authorities. Four others died between Thursday and Friday in the Donetsk region, the province’s Ukrainian governor reported as Russian troops press their attacks on Bakhmut and Avdiivka, a small city about 90km (55 miles) to the south that also remains under Ukrainian control.

Governor Pavlo Kyrylenko said the civilian population was suffering as the region has become an active war zone.

“Civilians who remain in the region live in constant fear without heating and electricity,” Kyrylenko said in televised remarks. “Their enemy is not only Russian cannons but also the cold.”

“Everywhere around us there are signs of destruction,” Baig said. “The power’s out in the city as well, and constantly we are hearing the battle and this fighting taking place.”

“Many people have already left,” he said, adding others have taken shelter in cellars.

Russia needs a victory in Bakhmut given its deteriorating position in Kherson and its loss of control over large swaths of the northeastern region of Kharkiv to a Ukrainian counteroffensive last month. The areas were among the first the Russian military captured after its February 24 invasion of Ukraine.

“Russia’s suffering defeats across the board,” said Samuel Ramani, an associate fellow at the Royal United Services Institute, a defence think-tank based in London. “They need the optics of some kind of an offensive victory to assuage critics at home and to show the Russian public that this war is still going to plan.”

The Wagner Group has played a prominent role in the war, and human rights organisations have accused its soldiers for hire of committing atrocities. Their deployment around Bakhmut reflects the city’s strategic importance to Moscow. However, it is unclear if the mercenaries have made many tangible gains, Ramani said.

“We’re seeing a situation where the Wagner Group is quite effective at creating terror amongst the local residents, but much less effective at actually capturing and holding territory,” he said.

At the very best, Russian forces are gaining 1km (0.6 miles) a week towards Bakhmut, he said.

The city had a population of about 73,000 people before the war, but about 90 percent have left the city, according to Kyrylenko, the Donetsk region’s governor. 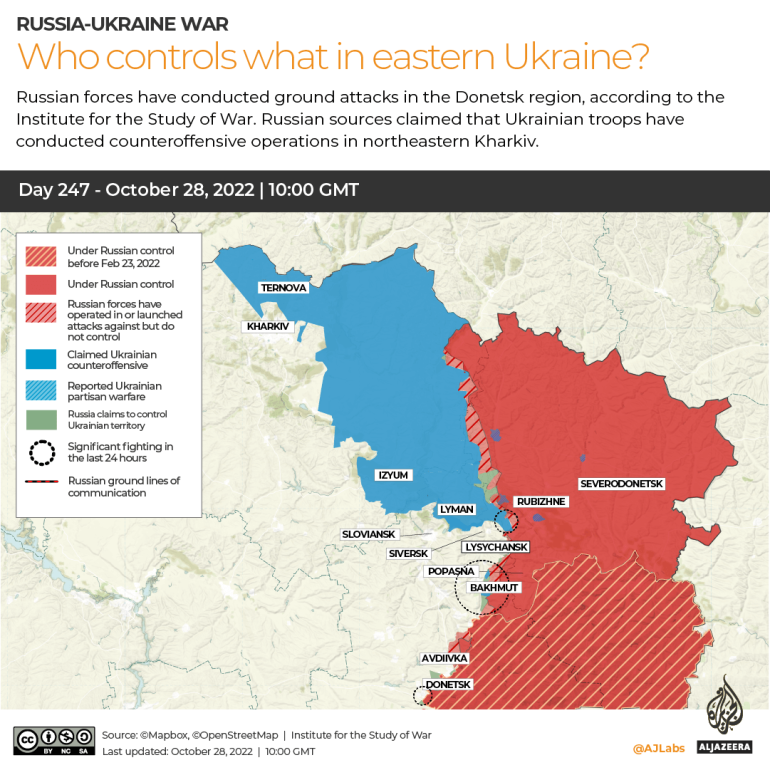 US consumer spending rises strongly even as wage growth moderates

Ukraine to get armoured combat vehicles from West, asks for tanks